The idea of CalculiX Launcher for Linux is to provide software, that is maximally portable (with minimal dependence to other libraries).
But it is not always possible because the size of binary is growing up when you merge it with libs.
There is a simple way to get know, what kind of binary file you have.
Just open console in the folder (or cd ... to it) and apply 'file' command to the binary.

For example, CCX is statically linked (requires only linux kernel to work) 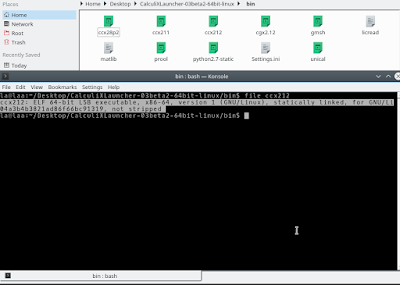 CGX, GMSH and Launcher itself, need some basic libraries (like GTK-2 for GUI).
Python 2.7 is provided as statically linked  (for predictable work of some py mesh converters).

Also you need terminal emulator to be able to run CCX and CGX. This simple software can be different for known linux distributions but most elementary terminal emulator, called xterm, can be used in this case.
In ubuntu you can install it as usual:

In worst case, there is a way to obtain statically linked xterm (about 5mb)

or any way you know, to do this standard action.
Here is link for yandex-drive and google-drive to get this executable (32bit kernel).